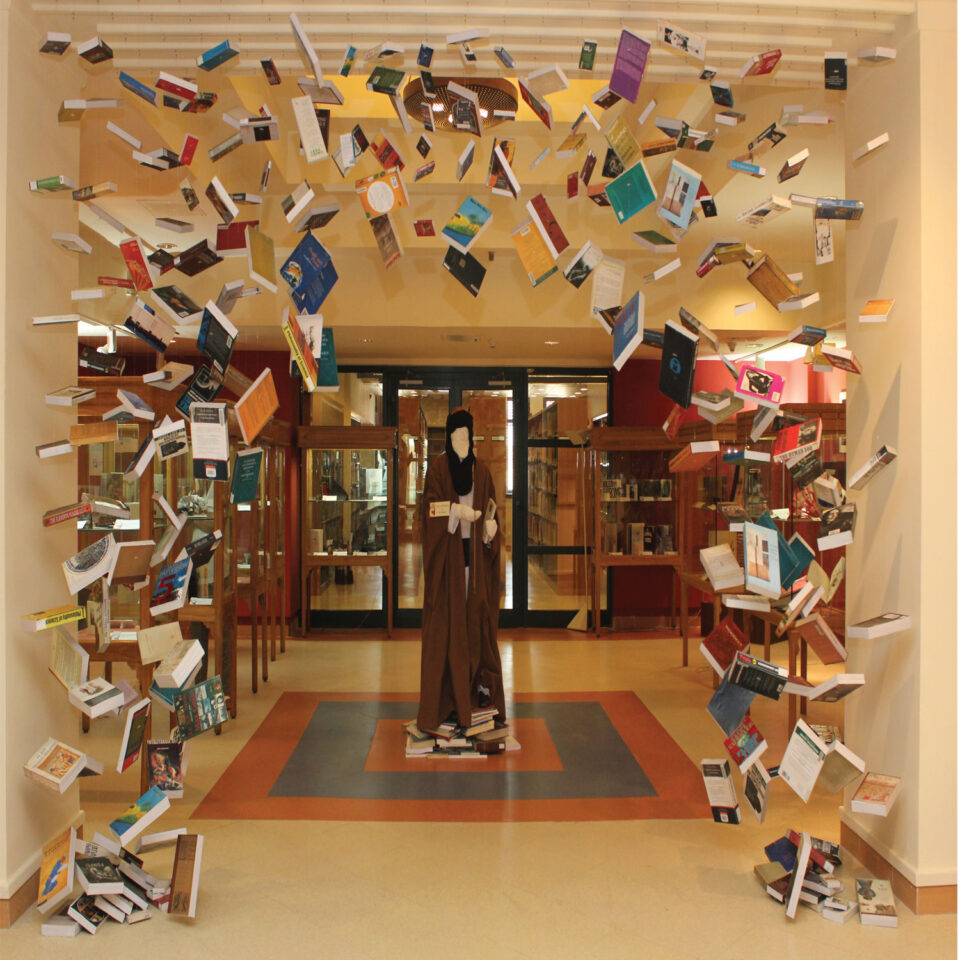 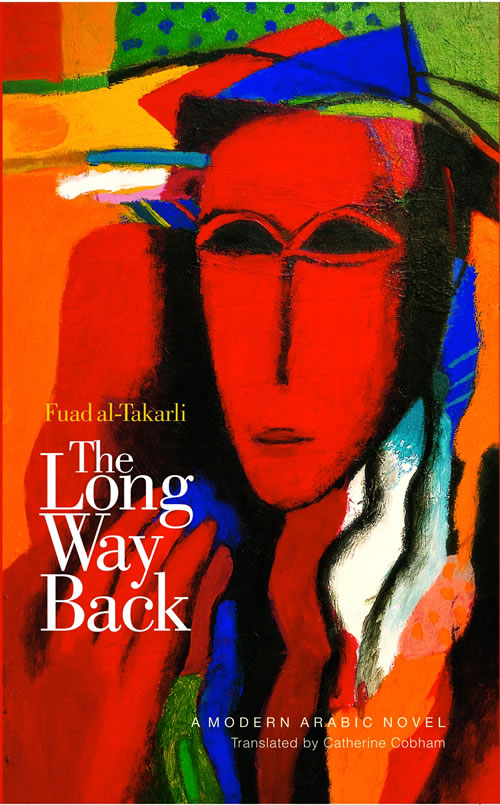 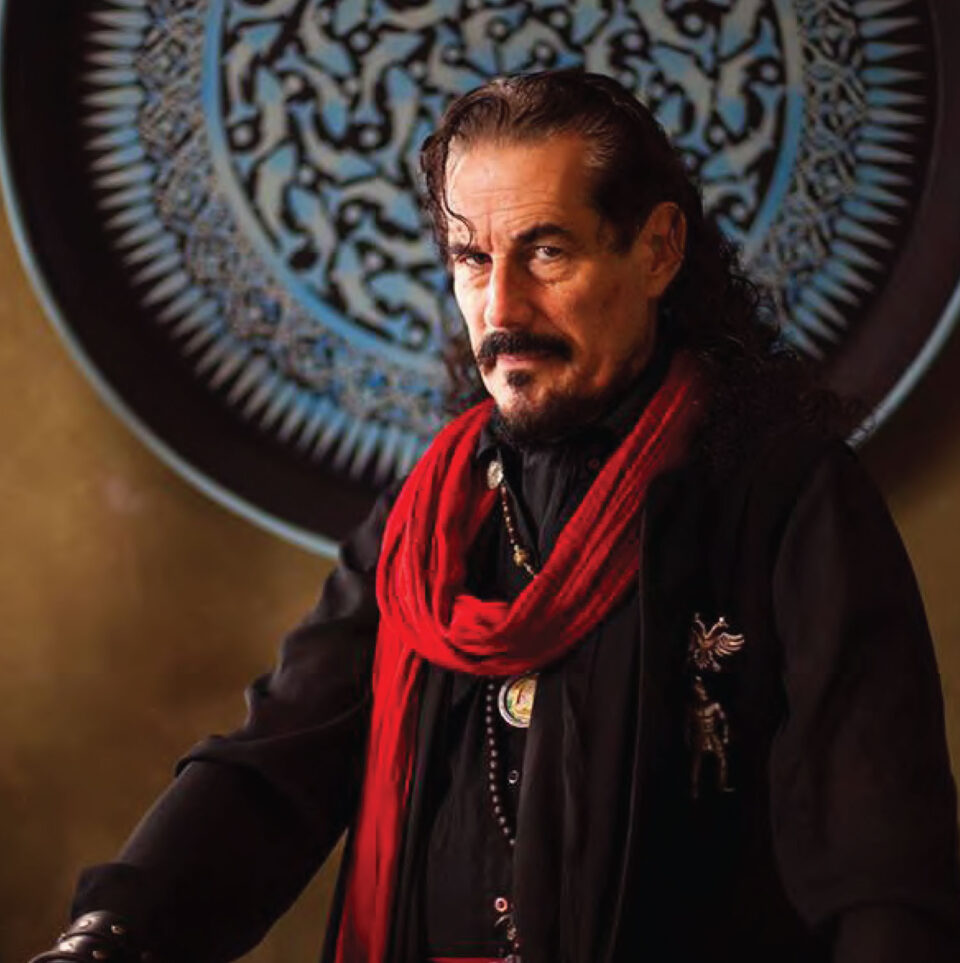 On March 5, 2007, al-Mutanabbi Street was busy with booksellers, men, women, and young boys and girls shopping for books and stationery. Right where the street bends was the Shabandar Café, the most popular spot on the street. One could almost hear the blending of sounds: spoons stirring tea, coffee being sipped, people discussing politics, silently reading the newspapers.

At 10:55 a.m., a car parked right across from the café. Five minutes later, an explosion ripped through the street.

Al-Mutanabbi Street dates back to the Abbasid Caliphate and is named after Abo al-Tayeb al-Mutanabbi, an Iraqi poet from the tenth century and one of the greatest Arab poets. The street is the beating heart of Baghdad’s intellectual community. It tells the history of the ancient city, embracing an unstable present and an uncertain future between the columns of its old buildings. Before the American invasion of 2003, al-Mutanabbi Street was a haven on the Tigris. It was the only place where knowledge was nourished and diversity respected; where people—despite the illicitness and oppression—exchanged banned books and literature, and shared radical ideas regardless if they were Sunni, Shia, Christian, Arab, or Kurd. On al-Mutanabbi Street, they were just Iraqis.

The war had started. Intellectuals and educators had left the country, and more than three hundred teachers and scientists had been assassinated or kidnapped. Prior to March 5, the street had been clouded by fear, silence, and vigilance. Yet, despite the chaos, it stood fast and slowly regained the original sense of tolerance and trust.

On that fateful day, thirty people were killed and more than a hundred wounded. The oldest bookstore in the street was completely destroyed, and the most famous bookseller, Mohammed Hayawi, was killed. The Shabandar Café, which dated back to 1914, was totally wrecked and five sons of the proprietor were killed. Men, women, children, and books were burnt and shredded. The smoke deformed the city’s skyline for two days. That car bomb was an act so loud and cruel, it changed the city and all Iraqis forever.

The Birth of an Idea

On the other side of the world in Boston, Beau Beausoleil, a man of words and a poet and bookseller, read the headlines in the paper. He was as devastated by the attack as any bookseller on al-Mutanabbi Street, and he knew that all book and art lovers would feel the same way. He quickly formed a coalition of letterpress printers, writers, poets, book artists, and readers to personally respond to the attack. The result was Al-Mutanabbi Street Starts Here, a cultural initiative where words and poems by both Arab and non-Arab writers were brought to life.

The first part of the project was the Broadside Project. One hundred and thirty letterpress printers expressed their feelings through the power of the printed word using broadsides, which have traditionally always been used to express opinion and rage. Beausoleil describes the Broadside Project as “an opportunity to look at and confront a truth of which we are a part. It is a project that asks something of its viewer.”[1]Persis M. Karim, “A Day That Lingers with Us Still,” World Literature Today, May 2012.

Parallel to the Broadside Project was the Al- Mutanabbi Street Starts Here Anthology, a collection of essays and poems edited by Beau Beausoleil and Palestinian-American poet Deema Shehabi. The anthology showcases the work of Iraqi and American poets and writers, in addition to other international writers responding to the bombing, it was published by PM Press in June 2012. But it didn’t stop here. Beausoleil made a call for book artists around the world, and 262 handmade books—carrying the memory of the bombing and the future of Iraq—were created. Most of these books and broadsides have been exhibited the world over in numerous cultural centers, universities, galleries, and art institutions, or sold to raise money for Doctors Without Borders.

In tribute, and as a part of its global tour, the project was hosted by the Rare Books and Special Collections Library located at the American University in Cairo, from March 5 until the end of August, 2014.

The exhibition was organized by Conchita Anorve-Tschirigi, curator for Regional Architecture Collections, and Philip Croom, associate dean for Rare Books and Special Collections, who both did a marvelous job making this exhibition a unique experience. At the entrance of the showroom, there are pictures of al-Mutanabbi Street before and after the explosion. Anorve-Tschirigi points out one picture in particular, of a bookseller on a sidewalk with his back turned to a dark burnt building and facing a collection of colorful books that he reorganized days after the explosion. The contrast between the dark background and the colorful foreground of the picture conveys a message so profound and clear, quoting Anorve-Tschirigi, “He is saying…I will continue selling my books. Nothing will stop me.”

The door of the showroom—framed with leatherbound books—propels the visitor to a striking scene, where a statue of al-Mutanabbi stands, surrounded by dozens of books floating in the air…and for a lightning moment, one thinks that magic does exist. Anorve-Tschirigi says, “People named it the flying books exhibition.” She adds, “The idea came to me from the bombing itself, I thought how would have the books looked like in this fraction of a second when the place exploded, that probably they were blown up and frozen in the air like this…for that fraction of a second.” She explains how these books are not real ones that they ruined to make the exhibit, as some people think initially, but models of books. Book covers were copied, cut, and glued on cardboard boxes and suspended from the ceiling via transparent strings to form the flying books illusion.

On the right side, the broadsides were hung from the ceiling for visitors to read. Some of them had poetry written on them while others had short phrases such as, “Make books not war.” Near the broadsides, a collection of fifty four books designed by the coalition’s book artists was displayed in glass boxes, yet one could almost feel the burnt edges of the paper and smell the leather, see the last ashes falling to the ground, hear the last scream, and inhale the last breath of clean air.

Conchita Anorve-Tschirigi and her team were able to create symbols and messages in every corner of the room: A pyramid of books represents ancient Egyptian culture in the right corner, a spiral minaret represents Mesopotamian culture on the opposite side, and the poetry of al-Mutanabbi hangs on the walls—every piece of art exhibited to tell a different story.

The statement was clear: Al-Mutanabbi Street Starts Here. And the misery, the injustice, the violence, and the ignorance end here. Beau Beausoleil and his tribe of 460 booklovers, artists, writers, and cultural workers, from twenty-one countries around the world have been able to travel beyond words and headlines, to a world where we can explore the idea of humanity and defend a noble idea.

Beausoleil was asked why he continues even though the street has gained its life back? He responded to this question in a panel discussion sponsored by the Santa Cruz Public Library saying, “We want to just keep going, and that’s what this is about, and we will not just go away. And to be a reminder of this incredible, gigantic wound…cultural and literal wound, and to be able to see al-Mutanabbi Street, and feel it in our own streets and in our own culture.”

Yet, despite the chaos, it stood fast and slowly regained the original sense of tolerance and trust.

At the beginning of the discussion, he also said, “There is this whole thing about doing something that has a beginning, a middle, and an end. But what has happened in Iraq has no end, and I didn’t want this project to end, I didn’t want it to have this goal and then everyone packs up, and then everyone goes home like at the end of the march. I wanted it to be something that would continue.”[2]Beau Beausoleil, Gary Young, and Felicia Rice, “Al Mutnabbi Street Starts Here Panel Discussion,” Santa Cruz Public Library/CTV Santa Cruz, May 31, 2011, … Continue reading

He was right. What happened in Iraq has no end. A few years after the attack, on September 12, 2012, bookstores and bookstalls were bulldozed by armed troops, leaving al-Mutanabbi Street all but destroyed. In solidarity, on September 29, 2012, young Iraqis organized a peaceful book festival with the name I am an Iraqi, I Read. Hundreds of men, women, and children gathered that day to read in public, to recite poetry and show their art, and to tell the world that they will not stop reading—that knowledge will prevail.

On that day, Rawan, a young girl, gave the event’s keynote speech. She told the story of Diogenes, the Greek philosopher, and how he searched for the truth, and how she and her friends discovered the only truth, that their homeland doesn’t need wailing and crying, it needs to be rebuilt, with culture, education, and reading. Despite her very young age, Rawan’s words were strong, wise, and soulful. She was living proof that al-Mutanabbi Street continues to fight and flourish. [3]Al-Mutanabbi Street—I am Iraqi, I Read Book Festival, February 21, 2013, https://www.youtube.com/watch?v=1_DkOIStwWE.

Baghdad’s heart was broken before. In AD 1258, when Mongol armies sacked the city, the Tigris witnessed the death of Iraq’s scientists and writers and the destruction of its Grand Library. The river was black with the ink of the books one day, and red with the blood of the people the following day, but the city lived again. Al-Mutanabbi himself was killed in AD 945 for insulting the leader Dabah Ben Yazeed in one of his poems, yet his spirit continues to live to this day through his words.

The plan was to exhibit Al-Mutanabbi Street Starts Here worldwide until 2014, and then for it to be sent to the Iraqi International Library as a gift for the people of Iraq in 2015. However, according to Anorve-Tschirigi, it might still travel to the Bibliotheca Alexandrina or to Beirut.

But even if the tour ends, the journey doesn’t.

We—readers, writers, artists and booksellers—will continue to grow, words have replaced the blood in our veins, and we will never die. The idea will spread, the story will be written, and future generations will form new rhythms of humanity…we are living on with gratefulness for every “Once upon a time” and every blank page, for the fire that burns books but ignites our souls to create.

Yes, a country with two large rivers tumbling down from mythic mountains

the sun, in its full anger, asserts its authority by drinking the waters and starving the land

This is Iraq as you all know

if not God’s, then mankind’s

we’re used to the alternating of water and fire

so we will come back with brighter flowers spring after spring

and on a single page we will repeat forty and one times al-Mutanabbi Street’s name.

Alaa Elbannan is the junior editor of Rowayat. She studied media and mass communications at the Faculty of Arts, University of Ain Shams. She practiced journalism when she was a student, and worked in advertising as a creative copywriter after graduation. She loves and appreciates every form of art, especially photography, painting, and music. 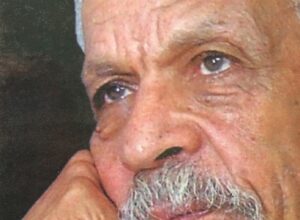 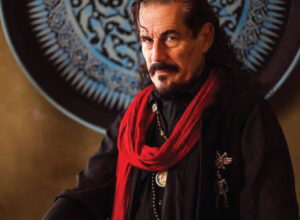