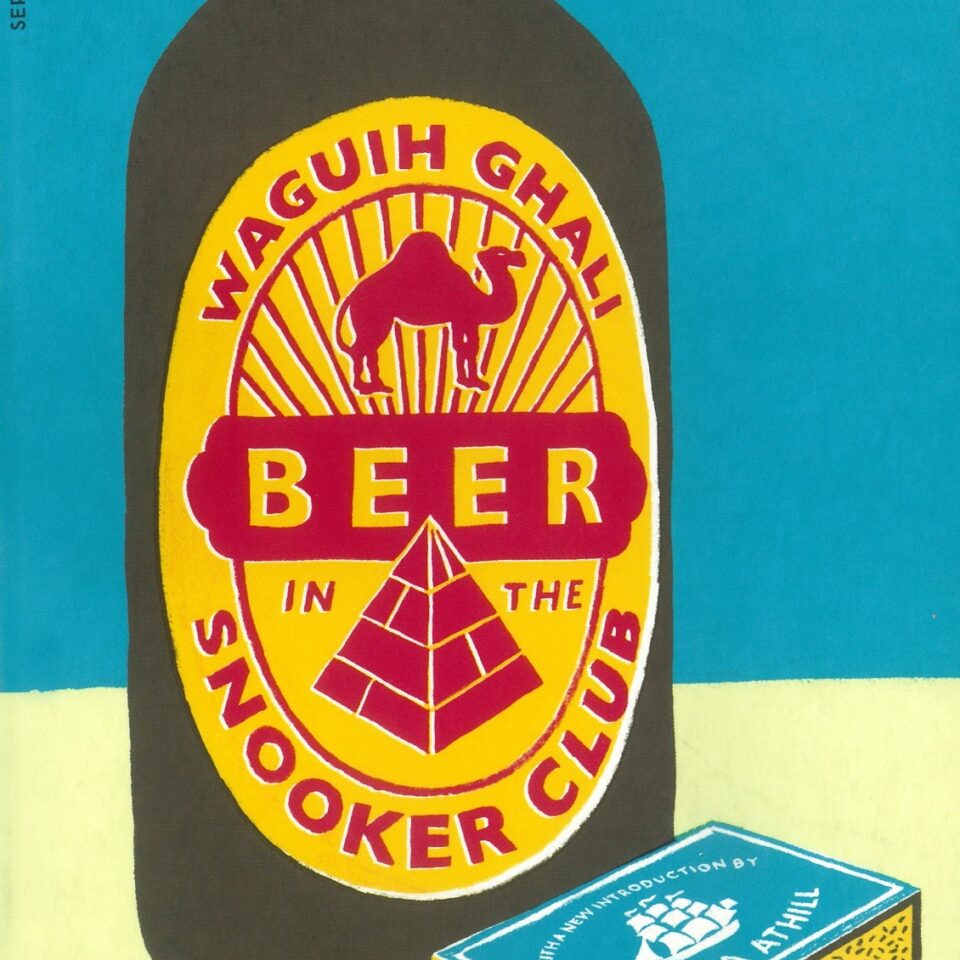 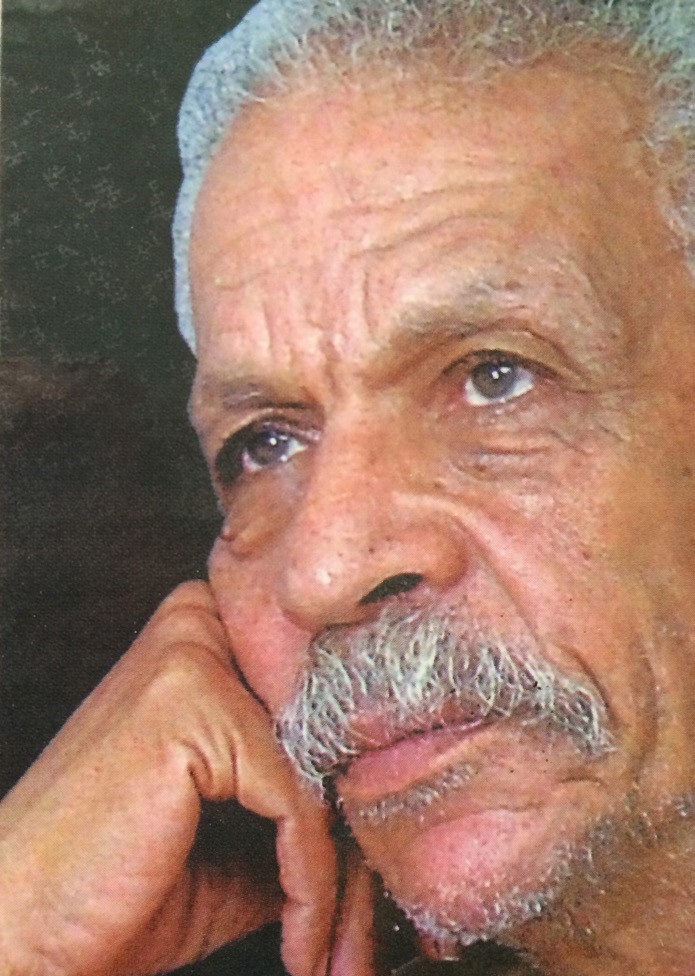 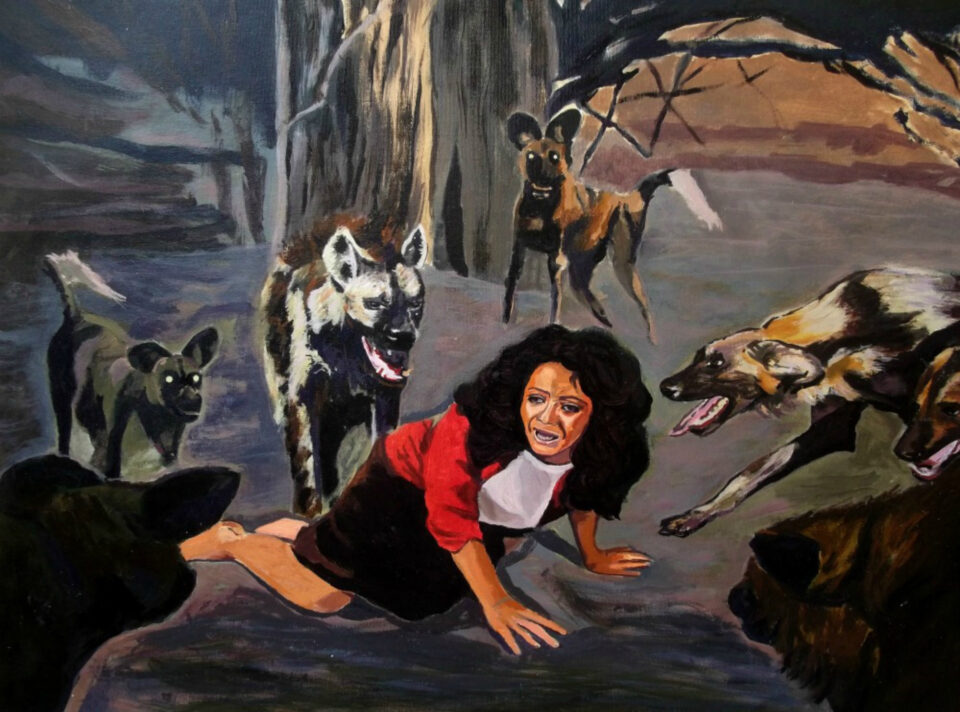 A moment will come when, collectively, we will step across a threshold. On the far side, Waguih Ghali’s Beer in the Snooker Club (1964) will no longer speak viscerally and immediately to our present world. Readers in this future space will still appreciate the novel’s craft, characters, and dark humor—just as we still appreciate Laurence Sterne’s Tristam Shandy (1767) or Ahmad Faris al-Shidyaq’s Leg Over Leg (1855)—but the book will no longer jab so deeply into our current anxieties. We are still far from reaching that threshold. Indeed, there is rarely a day when a page from Beer in the Snooker Club isn’t pointedly relevant to current events. In 2014, the novel that Ghali wrote in the 1960s is as wonderfully, terribly present as it must’ve been then.

Ghali’s classic novel—the only book he ever published— is set between Egypt and England during two periods: the mid-1950s struggle between Colonized (Egypt) and Colonizer (England) and the ensuing struggle to re-cast Egypt. When the narrator is a very young man, he goes out into the streets to protest the illegitimate British regime. Ram takes the side of the poor and travels to fight in Suez. Thousands were injured in the fight for ownership of the Suez, including Ram’s close friend Font. Hundreds were killed.

After the Brits fled Egypt, Ram and others in a jubilant Egypt cheered new, local leadership. Yet when we flash forward six years, which Ram largely spends in England, the “New” Egypt has been unable to stake out a path to a freer, authentically Egyptian future.

As Ram travels around the city, he sees the situation of the poor and disenfranchised as nearly unchanged. The only thing that’s new, it seems, is that Egypt’s army men are in more prominent positions. Ram himself remains at the edges of power. He is an impoverished member of a wealthy family, and when he visits his old social club, he watches the “elegant women floating here and there” with disaffected irony. He notes, “The strange thing about this club is that in the early days of the revolution, it was condemned as a symbol of exploitation and was taken over by a committee or something like that. Well, all the members are still members, with a few additional military members. I repeat the word ‘members’ a propos the military newcomers, because they too have acquired this floating, breeze-like, ethereal quality.”

Inside the club, Ram still finds the English Lady Tannely, just as he had before the 1952 revolution, and she’s still playing croquet and having sex with wealthy boys. Ram tells the reader: “The word ‘Egypt’ evokes in you, I suppose, a scene of a fellah trudging home in the twilight, a spade over his shoulder, and his son leading a cow behind him. Well, Egypt is a place where middle-aged people play croquet.” But in the post-1952 world, it’s not just croquet that people are playing. These years also mark England’s end as a colonial power and the rise of a new one: America. Middle-aged people are still playing croquet, but they’re also playing the Americans’ games. As Ram continues on into the club, he finds his wealthy cousin Mounir playing bridge with a man named Jack who is on a “fact-finding” mission in Cairo. At Ram’s request, Jack reels off a few of his facts:

“Back in L.A. where we live,” he continued, “we have one maid and one cook and no more. My wife Caroline has to do a lot of housework her own self. Well, here the housewife does not do any housework, she has a gardener, a chauffeur, two cooks…I believe,” he looked at Mounir for verification, and Mounir nodded wisely, “and a servant for the housework.”

Predictably, the American visitors fail to see what lies beyond the noses of the elites. But more troubling is that most Egyptian elites are stuck in the same position. What’s more, revolutionary fighters like Edna, Font, and Ram find themselves powerless post-revolution. As a young man, Ram had gotten into a righteous fistfight with Mounir when his cousin had suggested that colonialism was the best thing for Egypt. Ram had also gone into the streets and fought in Suez. But, in post-revolution years, the most Ram can do is push Mounir into the club’s pool.

The book was written a decade before Edward Said’s Orientalism, and it strongly prefigures Said’s game-changing academic work. Ram and his friends are part of a small, European-educated minority who, like Jack, have come to see their nation’s landscape through the French, British, and American literary imaginations. As a result, they find it nearly impossible to see, communicate, and connect with most Egyptians. As Ram observes, the places he frequented “were cosmopolitan not so much because they contained foreigners, but because the Egyptian born in them was a stranger to his land.”

Those most estranged are the foreign-educated, like Ram and Mounir. They have become unmoored from their surroundings, no longer able to judge Egypt without reading Flaubert or Time. Many cannot speak naturally in Arabic, and they don’t read Arabic books or listen to Arabic music. Ram’s aunts can’t even appreciate the great lady of Egyptian song, Um Kulthoum, who is too “Oriental” for their tastes. Young men like Ram and Font see that the situation is problematic. But, despite his ideals, Ram still enjoys his clothes, his beer, and his snooker club. He finds that he’s unable to join either the colonized or the colonizers, and he can’t reconstruct an authentically Egyptian self.

If anything, the 1950s struggle to decolonize, as depicted in Beer in the Snooker Club, led not to a more authentic Egypt, but to a new xenophobia. Ram’s lover, Edna, was born in Egypt, but she found herself suddenly unwelcome, whipped in the face by a soldier. Jews and other minority groups were targeted and many were leaving the country. The post-colonial struggles also led to the torture and imprisonment of many who opposed the new regime. As Ram looks for a career, he works for a time gathering photos of those tortured to make a record against the regime. But this too fails, and no one takes an interest in the photos.

At the beginning of the book, when Ram is young and he has little by way of ideology, his protests are utterly sincere. He first meets Edna, his beloved, when she witnesses a fistfight between him and his cousin. At a family dinner, his cousin blathers on about “Red menace” and “free enterprise,” and Ram remains detached. But when Mounir says that “England must stay at Suez and protect us from the Red Menace,” Ram can’t take it anymore. That’s when he comes to blows with his cousin, telling him that he can “wipe his backside” with American democracy.

Once Edna takes Ram under her wing, his life changes. “It was Edna who introduced me to Egyptian people. It is rare, in the milieu in which I was born, to know Egyptians.”

Through Edna—and through his own investigations—Ram realizes what he wants. And yet he cannot remake himself. His clear vision of authentic love and an authentic Egypt remain forever beyond his grasp. The further we go into the post-revolution years, the more Ram’s earnest gestures become slapstick. But the desperation of even Ram’s most clownish actions is both painful and funny, like laughing with fresh stitches in your stomach.

“Why, she is scattered all over so many people I know–[names illegible]…”

The author and his protagonist

Beer in the Snooker Club is not an autobiography. Yet Ghali shared much with his protagonist: He also was an impoverished member of a wealthy Coptic family and was a tragic figure, never able to effect the changes he desired in his life or in the world. A few years after the publication of his only novel, he committed suicide by swallowing an overdose of sleeping pills at the home of his editor and friend, Diana Athill.

Ghali spoke English and French at home far more than Arabic. As a result, he belonged neither to Egypt nor to Europe, just as he belonged neither to Christianity nor to Islam, neither among the world’s wealthy nor with its poor. This in-betweenness allowed him to move between different universes, and made him a great observer of human behavior. But it also left him—like Ram—unable to claim any place as his own.

Ram is similarly enlightened and paralyzed by his alienations. He grows ever more eloquent and charming as the book progresses, yet he cannot put his tongue to any use, either in Britain or in Egypt. In Britain, he is marginalized by a declining power. In Egypt, he is unable to find a way to speak to the audience that needs him most. If Ram had written a novel, we can assume that he, like Ghali, wouldn’t have written it in his mother tongue.

Appreciation of Ghali and his work is slowly growing. Since the summer of 2013, those interested in his life have been able to find his unpublished papers, diaries (1964-1968), and manuscript fragments online at http:/ghali.library.cornell.edu/. The diaries include notes on books Ghali read—from works by James Baldwin to Fyodor Dostoyevsky to Tawfiq al-Hakim to V.S. Naipaul—and reflect on the inspirations for some of the Beer in the Snooker Club characters.

In the second notebook, written between April and October 1965, Ghali notes that Diana Athill suggested he bring “Edna herself” to a party. Athill imagined, Ghali writes, that “Edna was the same Edna of my book.” But, Ghali reflects, “Where is this Edna of the book? Why, she is scattered all over so many people I know — [names illegible]….” However, he adds, “Even I have believed she existed.”

Many readers continue to believe in the reality of Edna, Ram, Font, Mounir, and the other Beer in the Snooker Club characters. Indeed, as the years pass, these characters are only growing stronger. Many of the twentieth century’s other great novels about Egypt—Zayni Barakat, The Children of the Alley, Zaat—remain monuments of literary achievement, but no longer speak as vividly to contemporary concerns. The issues raised in Beer in the Snooker Club are eerily contemporary. If Beer in the Snooker Club is a “coming-of-age” novel, then Ram never manages to cross the threshold into adulthood. He, like the novel itself, remains frozen in time, as the questions Ghali raised in 1964 remain unanswered.

M Lynx Qualey is a critic, editor, translator, and founder of ArabLit and ArabLit Quarterly, as well as co-host of the BULAQ podcast. She won a Palestine Book Award, along with Sonia Nimr, for her translation of Sonia’s Wondrous Journeys in Strange Lands. 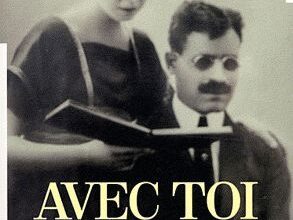 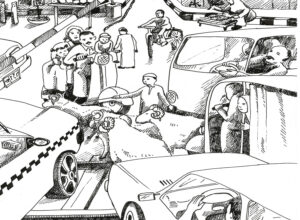 Before coming to Egypt, I had often heard the traffic in Cairo described as “chaos” without ever really…
Jason Stoneking