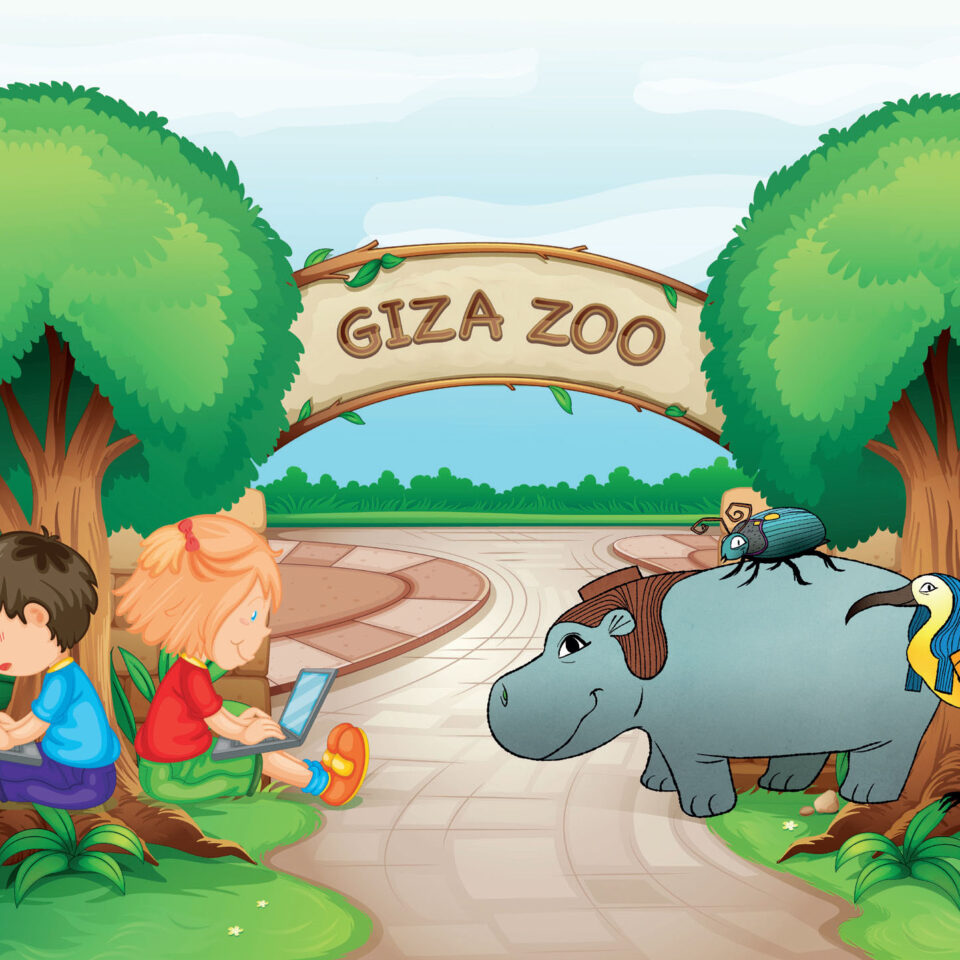 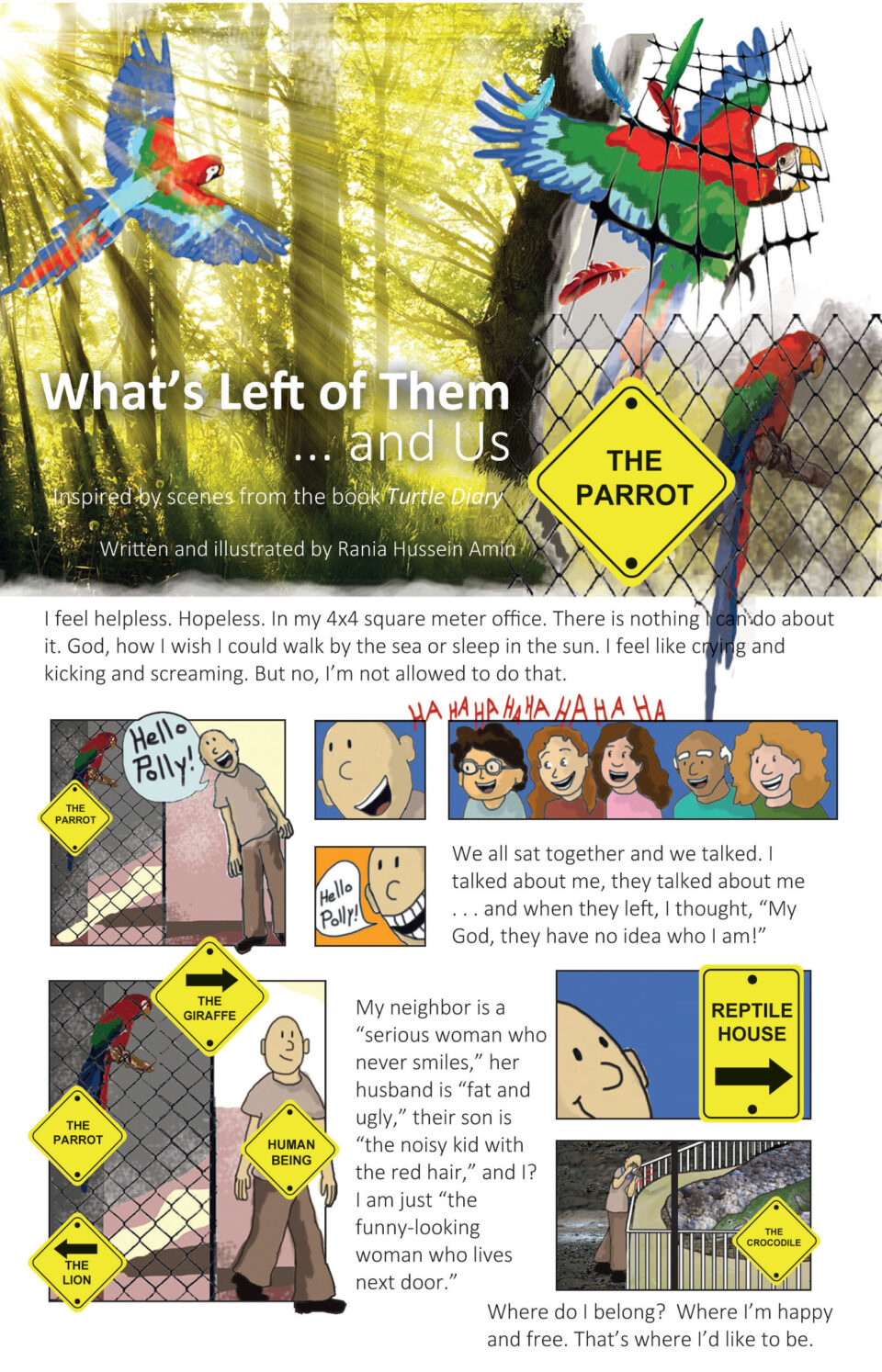 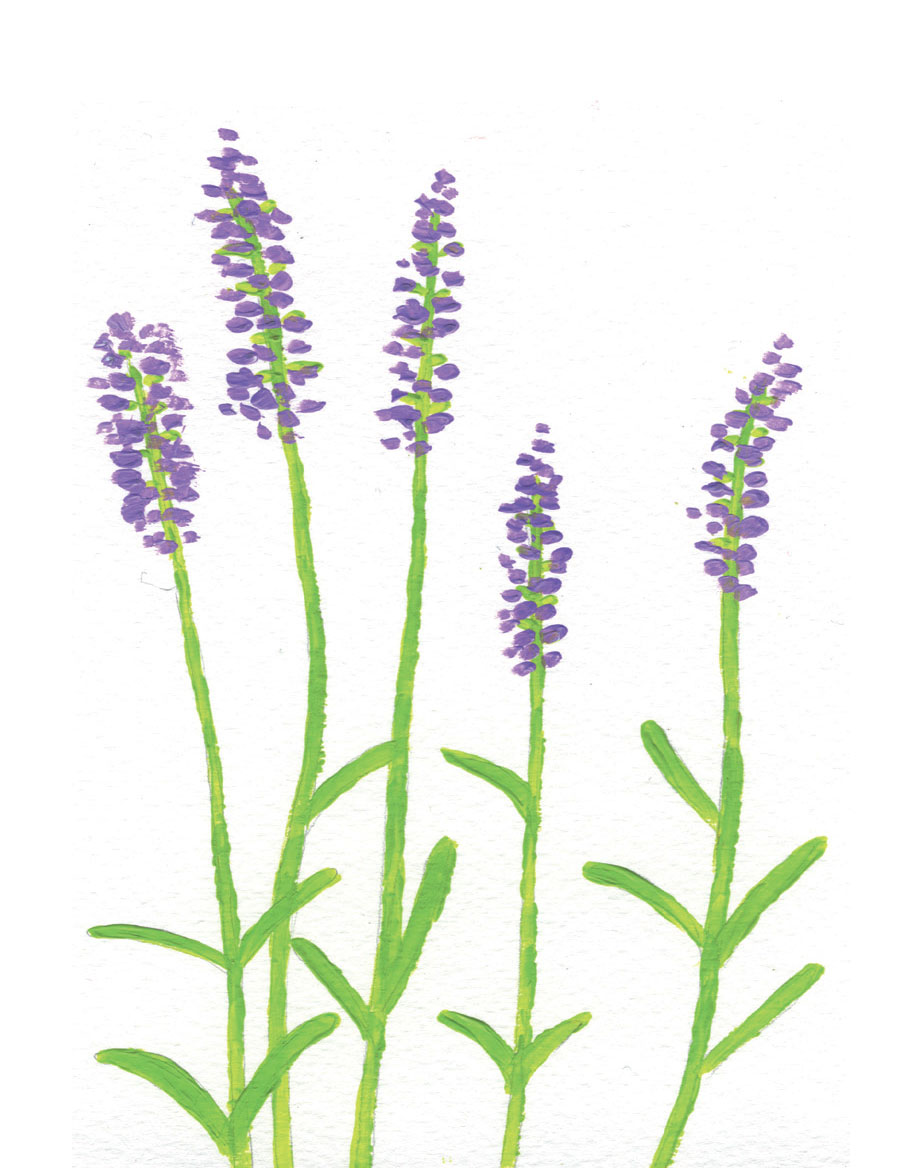 What’s Left Of Them And Us

For many years, a beetle, a female hippopotamus, and an ibis lived happily together in the Giza Zoo in Egypt. They were great friends who enjoyed meeting daily under an old gemeza (sycamore) tree. The beetle was small, black, and very active.

It always jumped around and swung up and down, and when it was tired it slept on the hippopotamus’s back. The hippopotamus was big and fluffy with wide black eyes that reflected kindness and care. She was always interested to learn and discover, but because of her huge size, heavy weight, and slow movement, she always depended on the scarab and the ibis to bring her information and answer her questions. The ibis was very enthusiastic and lively.

He often flew around to discover places inside and outside the zoo. He would then return to share tales of his adventures with the scarab and the hippopotamus Now, the Giza Zoo was a beautiful place for them to live. Its walkways are paved with colored pebbles and beautiful mosaic pictures. It is designed with streams, lakes, and bridges in different places.

The three friends enjoyed looking up at its landscaped hills planted with cactus plants and observing the habitats of the various animals that live there. They liked living in the zoo, which was quiet for most of the week, except for Fridays—when it would flood with thousands of visitors. They were always happy when children came to the zoo on school trips. It was their chance to see new faces, hear different voices, and learn more about what children like to do.

The Giza Zoo was inaugurated on March 1, 1891. It
covers an area of about eighty acres. First, it was a
botanical garden with many rare plants; but, later on, it
was converted into a zoological garden

On a bright, sunny day, the three friends were enjoying the lovely weather under the shade of the sycamore tree and watching the happy children on a trip to the zoo. The children were holding clipboards, pencils, and papers and seemed to be doing some research about the zoo animals.

As the beetle, the hippopotamus, and the ibis were watching these energetic visitors, they noticed a group of children sitting and chatting on the other side of the sycamore tree. Their voices grew louder and louder, so that the three animal friends could hear their conversation very well. The children were arguing about the origins of the beetle, the hippopotamus, and the ibis. Were they in their authentic habitat? Did they exist in ancient Egypt?What were their ancient names? The more the children discussed the animal friends, the more excited and enthusiastic the animal friends became about their origins and history.

Finally the children looked at each other. “Why are we wasting our time?” one of them said. “Let’s find the correct information on the Internet. Why don’t you get the laptop out?” One of them took a small, rectangular silver device out of his backpack and began typing. The three animal friends gazed secretly from the other side of the tree and held their breaths. They could not imagine how this piece of metal could give anyone correct information.

One of the children typed BEETLE and screamed, “Khepri!” as the word appeared on the laptop screen. The child read aloud, “This was a very special god in ancient Egypt. He was the symbol of the rising sun and rebirth.”

When the beetle heard what the children said, he perked up, wanting to know more about his origin.

The scarab beetle is a member of the family
Scarabaeidae, which currently consists of over 30,000
species of beetles worldwide. The species in this large
family are often called scarabs or scarab beetles. They
were worshipped in ancient Egypt and were also used
as amulets.

Another child shouted, “Taweret is one of the names of hippos in ancient Egypt. Taweret was the female hippo. She was the lady goddess who nursed newborn babies.” The hippo opened her eyes wide and said, “I must have been so busy with all those babies! I wish the children could tell me more.”

When the children typed IBIS, they all yelled out, “Djehewty! The god of learning, wisdom and science.”

“Hah, did you hear? I was the knowledgeable one,” said the ibis.

As the children continued their online search for more information, many words and pictures showed up on the screen. The three animal friends were surprised and impressed. How could this toy-like tool provide all this information? The hippo lifted up her eyes with a very deep look and gazed at her companions and said, “Guys, we have to have one of those machines.”

The beetle jumped from one spot to another on the hippo’s body and said, “Yes, yes, yes! We should, we should!”

In a profound voice reflecting wisdom and knowledge, the ibis said, “There is one in the office of the zoo manager. I saw it when I was flying by the window one day. Let’s go there tonight to check it out.”

While they were waiting for the zoo to close for the day, our three friends, the beetle, the hippopotamus, and th ibis contemplated, imagined, and dreamed. What would their origins be? Had they always looked and sounded like their ancestors? Hundreds and hundreds of thoughts and ideas popped up and danced in their heads.

After the guards closed the zoo and went off to their rooms, the three friends started their journey of discovery. Heh, heh, rolled the hippo slowly, while the scarab beetle crept next to her. The ibis flew to the manager’s room and waited for his two friends.

The scarab beetle sneaked under the office door and unlocked the handle, and the ibis flew in while the hippo watched through the window, as she was too big to pass through the door.

And there it was! A silver device just like the one they had seen with the children. The three friends needed to decide what to search for on the silver device. They finally agreed that they wanted to find out more about their origins.

The ibis used his beak to type SCARAB BEETLE on the keyboard. Many articles came up on the screen. The first one said, “The scarab beetle was named Khepri. It represented the rising sun, one of the many forms of Ra: the sun god in ancient Egypt.” 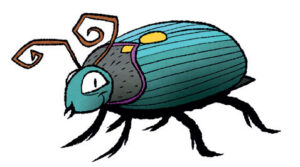 “Yeah, my name was Khepri. I like that, but why did the ancient Egyptians choose me as a symbol of the rising sun?”

“Good question,” said the hippo. She looked at the ibis and said, “Go ahead find an answer to this question.”

The ibis typed the question and read out the answer: “The ancient Egyptians saw the beetle rolling its ball of dung before it, so they imagined it was pushing the sun, so that it would rise in the eastern horizon every day after the long night journey. This was a symbol and sign of a new day, a new life, and a rebirth of the sun every morning.”

“Ah, thank goodness, I don’t really have to push the sun anymore! I think it would be very heavy—and hot, too!”

“Stop talking about the beetle,” said the hippo. “Let us find my roots, too!” She pressed her nose against the window and snorted impatiently, “Come on, Ibis, try to find it.”

The ibis typed FEMALE HIPPOPOTAMUS. A moment later, he read in a loud voice, “Your name was Taweret.”

“Cool, that’s a cute name! What did it mean?” And the ibis typed again, “Ah, it meant the great one.”

“Well, of course, I am the great one,” said the hippo. “Look at my size. But I heard those children saying something about babies. Can you find out what that meant?”

“I’ll tell you in a second,” the ibis typed furiously. “Ah, here it is: Taweret was 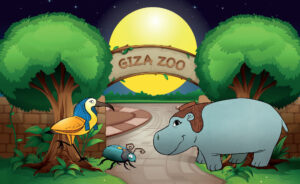 a goddess in ancient Egypt. She was a protective goddess and the midwife who protected women and children and guarded the mother and her newborn child.”

“Is that it?” asked the hippo.

“No, no, there is a lot more. Ah, they put small statues of Taweret in the tombs to care for people when they were reborn in the afterlife.”

“Afterlife? What do you mean?” The beetle and the hippo asked the ibis.

“I had the same question,” he said. The three animal friends gazed at the laptop screen while the ibis entered the words AFTERLIFE IN ANCIENT EGYPT. Now the laptop listed dozens of pages and they chose one to investigate.

Ancient Egyptians watched the sun rising and setting every day and then rising again the next morning. They watched the Nile River rising, flooding, and going down every year. The Egyptians believed that just as the sun and Nile rise and recede, they too have a second life after they die. They planned to enjoy everything in the afterlife that they had enjoyed in their first life. 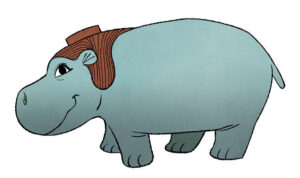 “Ah, now I understand,” the hippo said. “They wanted my statue in their tombs so I could also take care of them in their second life, as I did when they were born the very first time. Oh my, that is a lot of work, but I am capable of it.”

Since the beginning of ancient Egyptian history, male
hippos were thought of as symbols of chaos and evil as
they represented the god Seth, who killed his brother
Osiris according to the legend. However, female
hippopotami were seen as protective divinities who took
care of newborn children.

“What about you?” said the beetle to the ibis. “Oh, I wanted to serve you first. Now it is my turn.” The ibis typed the letters of his name, and there it came, a list of titles, illustrations, and information.

The eyes of the ibis gleamed with pride as he read one of the sites, “The ibis bird is a member of a big ibis bird family. It is a waterfowl. It lives by riverbanks, lagoons, swamps, and in other coastal areas. It lived in ancient Egypt. The ancient Egyptians chose him to be one of the figures of Djehewty (the god of wisdom), learning, time telling, and science. Ancient Egyptians believed that he was the great scribe and the inventor of hieroglyphics and writing.”

The ibis is a big bird that can reach a height of 76 cm. It
eats grasshoppers, locusts, crickets, and water beetles
as well as worms, molluscs, crustaceans, fish, eggs, and
carrion. Ancient Egyptians thought the ibis represented
wisdom and intelligence as it arrived in Egypt every
year before the annual inundation, as if informing the
Egyptians of the coming flood. 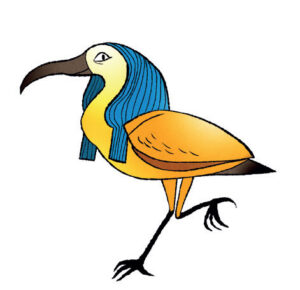 The three friends were now so delighted by the stories of their origins that they couldn’t wait to discover more.

“Now what?” said the ibis. “Do you think we should use our ancient names?”

“Yessssssssss. That’s a great idea,” agreed the hippo and the beetle.

On that day, Khepri, Taweret, and Djehewty started a long journey of discoveries. Every night, after the Giza Zoo closed, they looked at each other and said, “Yalla Beena! Let’s go!” and started their trek to the manager’s room. They typed and typed and typed on the laptop and discovered and learned and imagined and sent their knowledge to share with everyone taht el-gemeza.

Herself a child at heart, it was Jailan’s dream to create Rowayat Gemeza, a journal that looks at the world through the eyes and dreams of children. 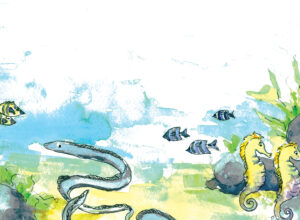 I live in the fifth reef in the Asora cluster, which is neither very deep nor very shallow.…
Menna Taher 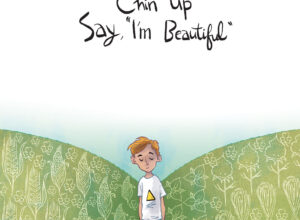 From the first day Sam moved to live at his grandmother’s house on the farm, he had fallen…
Rania Hussein Amin